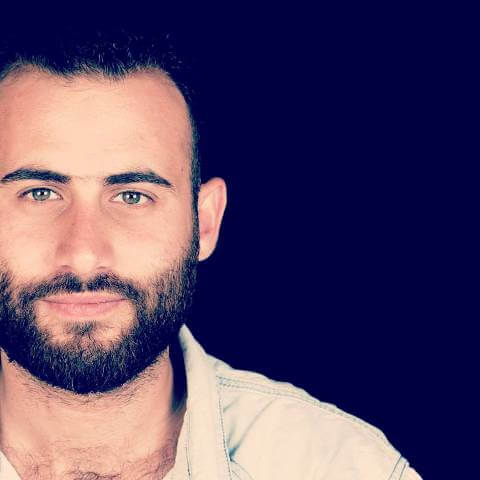 You have probably already seen Moe. As an active person his volunteering efforts have cropped up on videos for the news agencies AJ+ and Brandpunt+, amongst others. Moe is the only member of the Takecarebnb team so far with the expert position of having been both a guest and a volunteer. I caught up with him to ask about his experience as a guest and why he thinks the Takecarebnb process is important.

What was like to be a guest, were you nervous? ‘I was nervous; it was my first experience with Dutch people. I prepared a long list of questions to ask: Would I be given a key? Could I bring my girlfriend round? What hours were reasonable for me to come and go? When I met them even though they were really friendly I was so overwhelmed that I couldn’t ask them anything.’ His hosts Tijn and Michael later reassured him that despite his natural apprehension, no question would have been too outlandish.

And why does Moe think the concept of living with a Dutch family is important? ‘…because it’s the first step before becoming involved in the Dutch community. You learn about Dutch society; their culture, the way they treat each other, their family relationships, the way they raise their children. These things are of course slightly different in Syria. With this received knowledge you become prepared to enter a new society. It’s a very healthy way to enter, from a point of understanding.’

It was personally nice for Moe to be around the Dutch language. He loved being in a house in a big city where there were more resources. ‘You can begin your life before you are even assigned a house. I found the Dutch to be very open minded and helpful.’

And what about the AZC? ‘When I was in the AZC I was in Heerlen and it was 20 minutes by bus to the nearest city. There were only two small supermarkets and it was 6€ to get into the city. For someone with a budget of 58€ a week it was not feasible to commute.’

Do you get bored at the AZC? ‘Very bored. When a person finally reaches the Netherlands they arrive with a lot of energy and this energy is transformed into things you can do. When I arrived I was determined to teach myself Dutch. The first week I was studying 8-10 hours a day with YouTube tutorials. The second week it was 4 hours. The third week it was 3. By the 4th ennui had settled in. Surrounded by walls your physical inactivity spreads and becomes mental inactivity. I feel it will take me 2 years to recover from these 6 months of being alone with my thoughts in a remote place. And I had already lost 3 years in Lebanon and Jordan.

How does the Takecarebnb process help combat these issues? ‘Takecarebnb prepares new members of society as they enter it. If they try and learn through the official channels it’s too slow, it’s not enough. Staying with a host family you make Dutch friends.’

And what do you think about the hosting in the context of future society? ‘For me this is the main point. You become a productive member of society much faster. This is important not just for these newcomers but also for future Dutch society. You are exposed to other Dutch people and they are exposed to you, you learn that there is nothing scary about each other. You learn to respect each other, to work together, your children play together and these relationships then shape the future.

This solves many of the problems of modern integration, previous communities that arrived here that did not have the opportunity to mix in with such camaraderie and therefore may not have assimilated as successfully. In my work I want to make sure that the Syrian community becomes a positive, productive, integrated part of Dutch society.’

It’s natural for people to be tribal. In universities you gravitate towards like-minded groups, you’ll have the communists, and the stoners, the Muslims. Basic integration stops strife between these groups. This creates a healthy future, ne that is prepared for globalization.

In some areas Dutch society can be fractionalized and they need something to gather them in one place, something beyond political parties. I have noticed that the Dutch love storytelling, they love hearing about shared experience.

When I studied at Hotel school de Haag my classmates they told me they had a picture of refugees and getting to know me changed this picture. Because we were able to gather and meet and work and play and party together. This is a great strategy for integration, encouraging diversity and facilitating their socializing and exposing them to each other in the everyday experience.’

Syrian skipper does what he likes best in the Netherlands: sailing