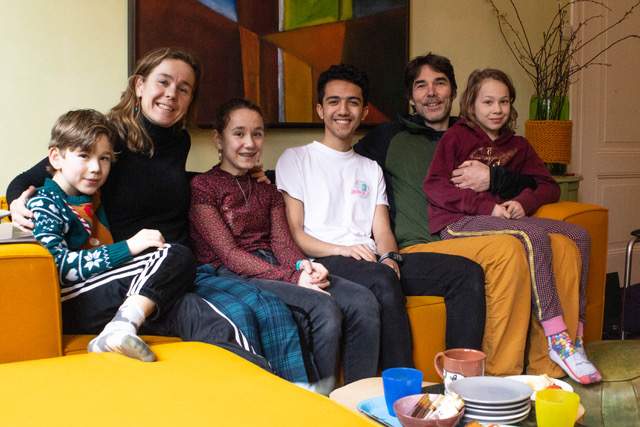 Amran (19) fled from Yemen eight years ago. He travelled through Malaysia and Spain, eventually coming to The Netherlands. He is currently studying in Tilburg and has been living with Judith, John and their children in Dordrecht for two months.

“When we bought this house, we always felt it should be a hospitable home,” says John. “Of course it was a little scary to open your home to someone, as I’m not always in a good mood. It makes you vulnerable, especially as a family. As soon as we met Amran, the scary feeling disappeared.”

Judith: “I love sharing with other people, living with others. The reality is that this is a scary time, with the lockdown and the children at home. But that shows how we really are, not just a nice version of it. I think that’s good, and I’m learning from this. Not everything has to be perfect.”

As soon as Amran received his residence permit, he began studying. “I wanted to get to know the society, and speak the language of the people around me. But I didn’t know much about them. Through someone I knew in Ter Apel, I learned about Takecarebnb and this family. I arrived in November. It was a new experience. I didn’t have any expectations, but I did think it would be very different. Now that I have arrived in this family, it reminds me of my own family.”

In similarities, not in differences

Judith and her family are lucky to find someone like Amran: “Lots of people think in differences, but Amran thinks in similarities. Many people ask Amran if this isn’t strange for him. He replies that it isn’t, that he prefers to look at the similarities. It feels like we have a lot of similarities.”

At the same time, John also notices the differences: “I am aware of my own privileges. Amran has to build his life in a strange country, where he has to deal with bureaucracies he doesn’t understand. I am impressed with his optimism. It is the differences that fight the indifference. In this world, indifference is always lurking. Now that Amran is staying with us, that is not the case. You remain open to the world. I hear a dad who calls, and Arabic music. There are differences, but these allow us to come together.”

The family plays Catan and Risk, excercise in the living room, and learn how to cook with a tajine. Amran helps the children with math and Spanish. The children play soccer and basketball with their guest. Amran was introduced to the soccer team. “The soccer team asked if we had another son,” laughs Judith.

Judith: “We celebrated Sinterklaas, Christmas and New Years together. Our friends like that Amran is here. Many people want to meet others, but not everyone has a house for it. My sister immediately said she could be there for Amran, should he need something. My mother in law bought him presents. It’s more than positive, they are so happy to meet him.”

Learning from each other

John: “What I learned from Amran? Hope and resilience. I see lions and bears everywhere on the road. For example, I have a lot of hassle at work, but compared to building your life in another country, that’s pretty insignificant. I can whine about hassle at work, but also learn something about hope and resilience. Not to put things into perspective, but precisely to tap into.”

Amran: “I think it’s great that people here are so honest. You don’t have to think about what you mean, that’s nice. And how to enjoy life. Every moment I learn something new.”

Judith: “What I feel is respect for how Amran has learned Dutch in a short time. We just keep rambling, Amran goes along with that pace. I myself know from the time I was abroad how tired you can be of the other language. And Amran sits day in and day out in the foreign Dutch language. I have a lot of respect for that. We don’t hold back.”

Amran  is currently doing a prebachelor in Tilburg. His dreams for the future? “I wish that my family is well and that I can continue my education. I don’t really have dreams, more goals. That I stay healthy and so do the people around me.”

John: “What I wish for Amran is calmness. I sometimes worry about how hard he works and his high expectations of himself. Good things take time. You’re 19, and you come across as wise. But sometimes I forget you’re 19. Calmness also has to do with peace and space to develop in balance.”

Judith  has a lot of confidence in Amran’s future: “He looks so beautifully at life, he is going to take many steps. He has a lot to offer, he is positive, so outreaching. He is going to achieve a lot in his life. And what I like is that he can do a lot of technical things, but he is also very socially gifted. He sees a lot. What I wish for Amran is that his family come here, that they find their way here and in the meantime he finds his own way. And that everyone finds their place and is happy.”

Want to become a host family?

Do you want to temporarily take someone into your family to familiarize them with the Netherlands and to let them get used to a new place of residence, just like Judith, John and their family? Our matchmaker provides guidance and after a positive introduction we first agree on a test stay weekend. The stay lasts at least three months. If you are interested or for more information, please email annemeijn@takecarebnb.org or register here.

Ibrahim stayed with Joke and Harm in Bennekom: “You are my brother and sister.”